After our memorable passage in Las Vegas and a very short night, our next stop was Zion  National Park. Some of us could handle the lack of sleep better than others and yes, some were a bit hungover. Therefore the Hoover Dam, which is only a half an hour outside of Vegas, looked a bit less impressive to some. After a cafeine break at Starbucks, the fallen had resurrected and we were ready for Zion, little did we know that all hell would break loose just hours later.

Zion (not the city from The Matrix)

So all was well when we entered Zion, the friendly park ranger (some aren’t) assured us that we could see the majority of the cool stuff before dusk. So full of newly discovered energy we started the first of our hikes, towards the ‘waterfall’. When we arrived at the fall, we were overwhelmed by the sheer beauty of this place. We took a moment to let it all sink  in (pun intended) and then set sail towards the next point of interest. When it started raining we first welcomed the refreshness, cause it was smoking hot. What we didn’t wanted was the freaking thunder and lightning. Offcourse none of us were prepared for this downpoor. We had to make a run for shelter, except Silke, who seemed to relish these conditions, it was just a stroll in the park for her. Rain was falling really hard now, streets got flooded, children were crying, Liesbeth was freezing, it was sheer bloody panic. (I may have exaggerated there a little bit) Unfortunately this meant that we had to turn back and cut our Zion trip short. After a longer sleep than usual, we felt rejuvenated and ready to tackle Bryce Canyon. At our first lookout point we were sadly reminded of the arrogance of the French. At one of the most beautiful vistas we’d encountered on our trip, some French woman plainly uttered these words “Ca ne me dit rien”. Needless to say that we were Godsmacked by that comment. Or as Stefanie would say it “Ta Gueule”.

After Bryce our next stop was Page, this was a gateway towards Antelope Canyon, Horse Shoe Bend and Lake Powell. When checking in for our 2 day home in Page, Klaas was responsible for our worst awkward moment of the trip (so sorry you guys). He made the mistake that Americans possess some sort of intelligence. He thought wrong. The dude at the registration office clearly had set his sights on a career in stand up comedy, but will never get there. Next morning we had booked a tour to go see the Antelope Canyon. One of the must see things on our trip. We had the privilige to have a guide all to ourselves and when Silke discovered that Josh (the guide) was a Indian rapper (he’s not bad at playing the flute too), she couldn’t wipe that smile off her face all day (she just has a thing for hip hop). In fact, this gave her the courage to be brave. At Lake Powell, she wanted to swim towards ‘Lonely Rock’. For those who haven’t been to Lake Powell, Lonely Rock stands right in the middle of the lake and for a normal human being this would take at least 45 minutes to swim. Silke thought it could be done in 15 though, luckily Klaas and Antony talked some sense into that girl. But Silke just couldn’t let it go, all she thought about was, touching that rock which stood in the middle of the lake. Because this urge became unbearable, she went looking for other options, enter Kyler Hopper. Silke had noticed that a boat was very close to shore and 2 guys were occupying it. She put on her bold shoes and simply asked if those men could take her to the rock. Because this is America and not Europe, they invited us on their boat and took us out for a spin. What happened next was nothing short of awesomeness. We all jumped off a 5m cliff, Silke got to touch the rock and then to top things, Kyler pulled out his wakeboard (no pun intended). We all had a go at it, but only Liesbeth managed to stand up and ride that board. She then later admitted that she took wakeboarding lessons a long time ago, but she doesn’t remember it that well. Sure didn’t look that way Liesbeth, but impressive of her nonetheless. Afterwards Antony made sure we had another awkward moment when he and Kyler had a weird manhugshakehands moment.

After stops at Arches NP and Mesa Verde NP, it was finally time for the big one, The Grand Canyon. For all but one it was the first encounter with this wonder of nature. The sheer size and scale of it, is beyond anyone’s imagination and one can just admire and absorb this place. For those of you who are planning to visit the Grand Canyon, Nos Klatos recommends the Bright Angel trail hike.
Afterwards our next stop was Lake Havasu, a lake right in the middle of the desert. What we found there was something that no one could prepare us for. Being Western Europeans we are used to mild temperatures between 10 and 20 degrees. At Lake Havasu, we had to face more than 45 degrees. Needless to say that we just melted away. Luckily Lake Havasu is watersport heaven, so we decided this was the perfect place to have some Jetski fun and fun it was. But jetskiing isn’t the only reason why Nos Klatos will never forget Lake Havasu, this is the place where we first saw The Dark Knight Rises, the epic conclusion to the trilogy.

Be sure to tune in for the epic conclusion of our trip. 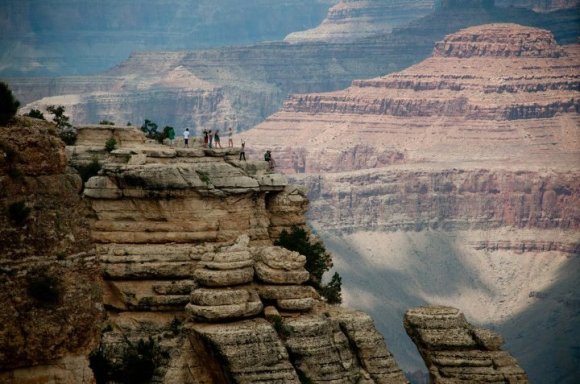